This story was months in the making. Glenn Scherer, my editor at Mongabay, and I had been discussing a story that took a step back from the breaking news around climate policy and rising biomass consumption to look at the science behind the issue. Since last spring, I researched and printed out peer-reviewed studies with diverging outcomes and read them closely. The biomass industry can point to scores of research that supports its claim that wood pellets are good for forests and a genuine climate solution, while forest advocates can pile up even more research that explains just how big a mistake the Kyoto Protocol made when it classified all bioenergy as renewable and carbon neutral.

Because there are so many points of difference, the biggest challenge in this story was narrowing the scope of issues to compare, knowing full well that in a 2,000-word story, important issues would not make it into this story. Still, I kept my focus on the issues industry officials tend to use the most in defending themselves against their growing chorus of critics.

This particular story is as balanced as fairness allows. By that I mean, it is fair in clearly explaining the industry arguments and citing the studies that back their claims, while making sure to be accurate in the overall thrust of the story in terms of the impact woody biomass is having on — to pick just one issue — the accuracy of carbon-emissions accounting.

This is among the more important stories I’ve done on this issue since I started covering it in 2018. Hopefully, it will serve as a trustworthy resource for new reporters coming to this story and heavily lobbied policymakers trying to figure out who and what to believe when it comes to energy generation and actual climate mitigation.

Having covered six United Nations climate summits, dating back to Lima, Peru, in 2014, I am all too familiar with the ambitious promises of climate action and the unified chorus of environmental-protection support from world leaders (until Trump). And then, of course, as my previous story out of British Columbia illustrates, nothing — a near-total lack of political will to prioritize nature, forests and biodiversity over anything resembling sacrifice or pushback against polluting industries and forestry interests.

President Joe Biden appears to be trying to change that. He has sent constant signals that he and his entire government intend to act on climate change in a broad and coordinated way not only to reassert US leadership after the reckless and embarrassing Trump years, but because of the science: we have less than 10 years to dramatically decarbonize G-20 economies to stave off the climate crisis that worsens every day, according to multiple reports from the International Panel on Climate Change.

In my first breaking news story since COP25 in Madrid in December 2019, I cover Biden’s Leaders Summit on Climate and address the gap between climate-action promises made by the US, China, the UK, EU and others, and what still stands in the way of desperately needed real action. The Eurasia Review republished my story.

As Dave McGlinchey of the Woodwell Climate Research Center told me: “This summit could be a critical turning point in our fight against climate change, but we have seen ambitious goals before and we have seen them fall flat. Today’s commitments must be followed with effective implementation, and with transparent reporting and accurate carbon accounting.”

Mike Gaworecki has done a great job hosting the Mongabay Newscast for years. He’s invited me on the program several times, including on Feb. 10, 2021 with this episode. Here, he talks with me about the story and issue I’ve been covering since spring 2018 along with an eco-warrior from North Macedonia who is an expert is the hazards of hydropower. Mike described the episode like this:

On this episode of the Mongabay Newscast, we look at two energy-related technologies that are being promoted as climate solutions, biomass and hydropower, which might have unintended consequences that hamper their ability to supply clean energy and thus might not be sustainable solutions at all.

Our first guest is Justin Catanoso, a professor at Wake Forest University and long-time Mongabay correspondent. Catanoso tells us about the loopholes in renewable energy policies that have allowed the biomass industry to flourish under the guise of “carbon neutrality,” even though the burning of biomass for energy releases more carbon emissions than burning coal.

We also speak with Ana Colovic Lesoska, a biologist by training who founded the Eko-Svest Center For Environmental Research in North Macedonia. Colovic Lesoska was instrumental in shutting down two large hydropower projects in her country’s Mavrovo National Park, but there are still more than 3,000 new hydropower projects proposed in the Balkans. She tells us why hydropower is being adopted by Balkan countries and whether or not hydropower can be a climate solution at any scale.

This story of mine posted during the same week that The New York Times reported that the Trump Administration had reversed or was in the process of reversing 99 environmental regulations designed to protect our air, water, wildlife, national parks and fragile ecosystems. Now, the EPA is set to issue a new ruling that very well could imperil the nation’s privately held woodlands from coast to coast. If the US defines the burning of wood pellets — a focus of my reporting for more than two years now — as carbon neutral, we are likely to see utilities shift in parts of the country to burning wood for energy. Some of the wood will come tree farms grown for wood products. But too much will come from established forests and thriving ecosystems.

My story focuses on a letter to Congressional leaders on House and Senate environmental committees from 200 scientists in 35 states urging them to look closing at the peer-reviewed science and protect the nations woodlands from the carbon-neutral designation.

The science could not be more clear. Burning wood for energy is not carbon neutral in any acceptable timeframe given the accelerating pace of global warming. Trees, whether in the tropics, temperate zones or boreal forests, remain the most reliable way of pulling greenhouse gases from the atmosphere and storing it in their leaves, limbs, trunks and soil as long as those trees are standing. In no sane world would we be clear-cutting forests for the wood to be pelletized and burned for energy. Yet this form of energy, with the carbon neutrality loophole (see story for details) is increasing across Europe, the United Kingdom and now Asia.

“The only option we have right now to avoid climate disaster is [to conserve] the natural world,” Bill Moomaw, co-author of the letter to Congress and a leading forest ecologist from Tufts University, told me in an interview for this story. “Forests are the one thing we have the greatest potential to protect. If we let them grow, they will store more and more carbon.”

This story linked here came about a bit on a lark. My new friends in the Italian press corps told me they were attending a late-afternoon press conference with leaders of the European Union and parliament. I decided to go, sat near the front, and tuned out the obligatory chatter about progress near the end of the summit (there was none). Instead, I had just one question and made sure the moderator called on me.

When he did, I mentioned that the top priority of the EU is about accuracy in carbon accounting, and yet it allows, as a matter of policy, for biomass (wood pellets) to be burned instead of called and being considered carbon neutral. As a result, biomass emissions, which studies have concluded pollute more than coal, are not counted by the nation burning them. So much for a commitment to accurate carbon accounting.

The two ministers paused before answering my question. More than 100 foreign journalists crowded the room. I thought they might ignore it. But they didn’t. And their answers surprised me enough, and the NGOs I ran it by, that I realized I had credible story to write on one of the high-profile issues I will continue to cover in this climate emergency saga. 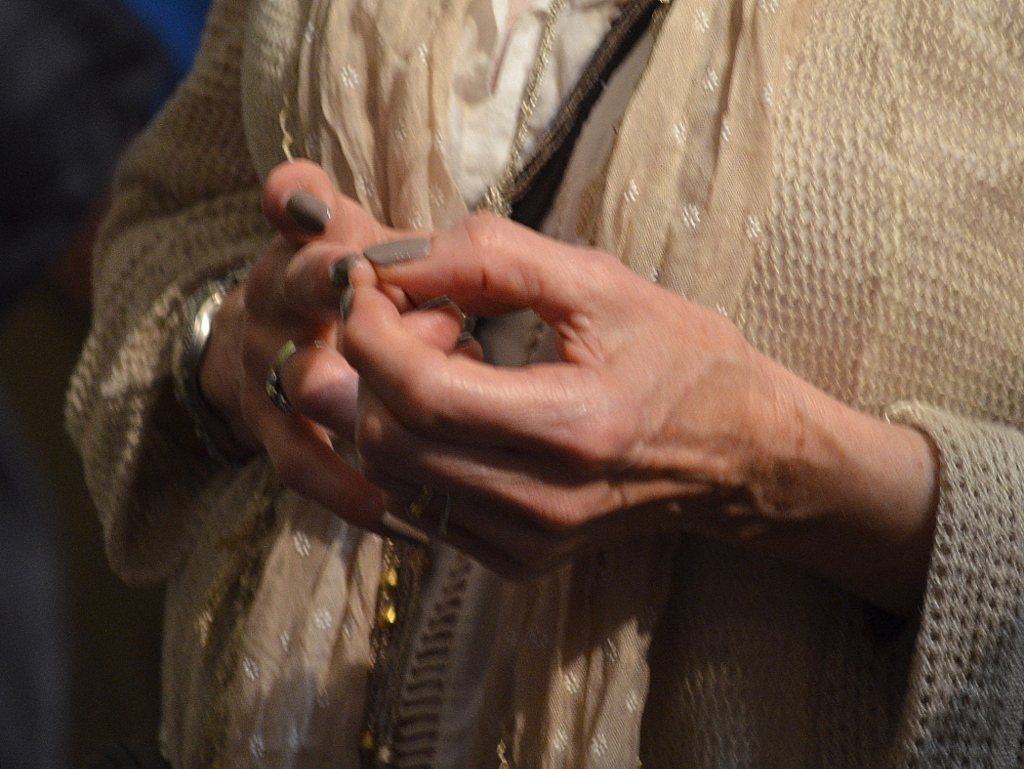 This is a little outside my specialty of climate change, but I couldn’t pass up the opportunity to spend time with and interview Emmylou Harris, one of the greatest voices in American music. She’s also a great humanitarian, as my story tries to explain. Here’s the link.

I met her in Rome, Italy, on June 3 thanks for the herculean efforts of my good friend Jill Drzewiecki with the Jesuit Refugee Service. She organized the three-day visit, which included a private concert for about 60 invited guests at the residence of David Lane, US ambassador to UN Agencies. 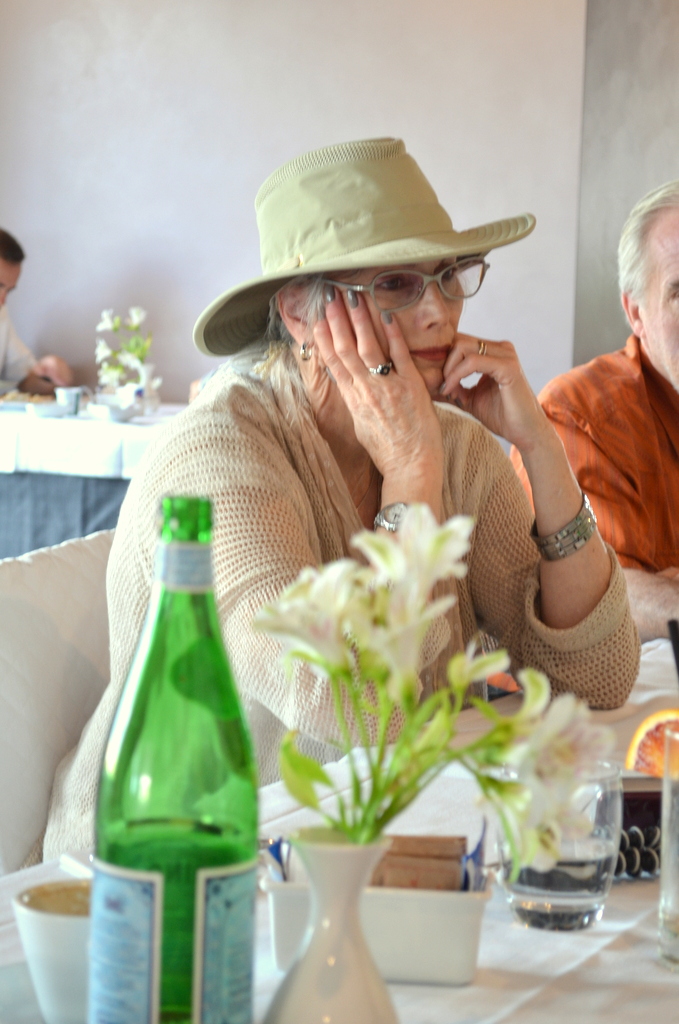 Emmylou trying to take in all the information being tossed her way by members of the Jesuit Refugee Service. Photo by Justin Catanoso 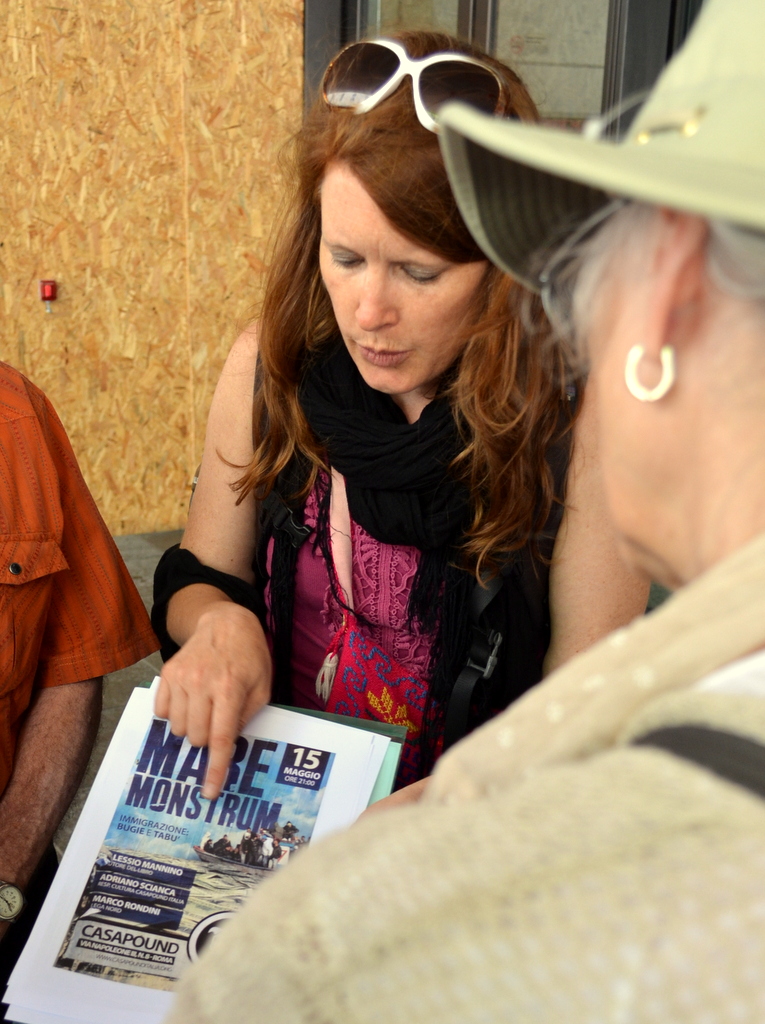 My good friend with JRS, Jill Drzewiecki, telling Emmylou about the discrimination encountered daily by refugees in Italy. Photo by Justin Catanoso 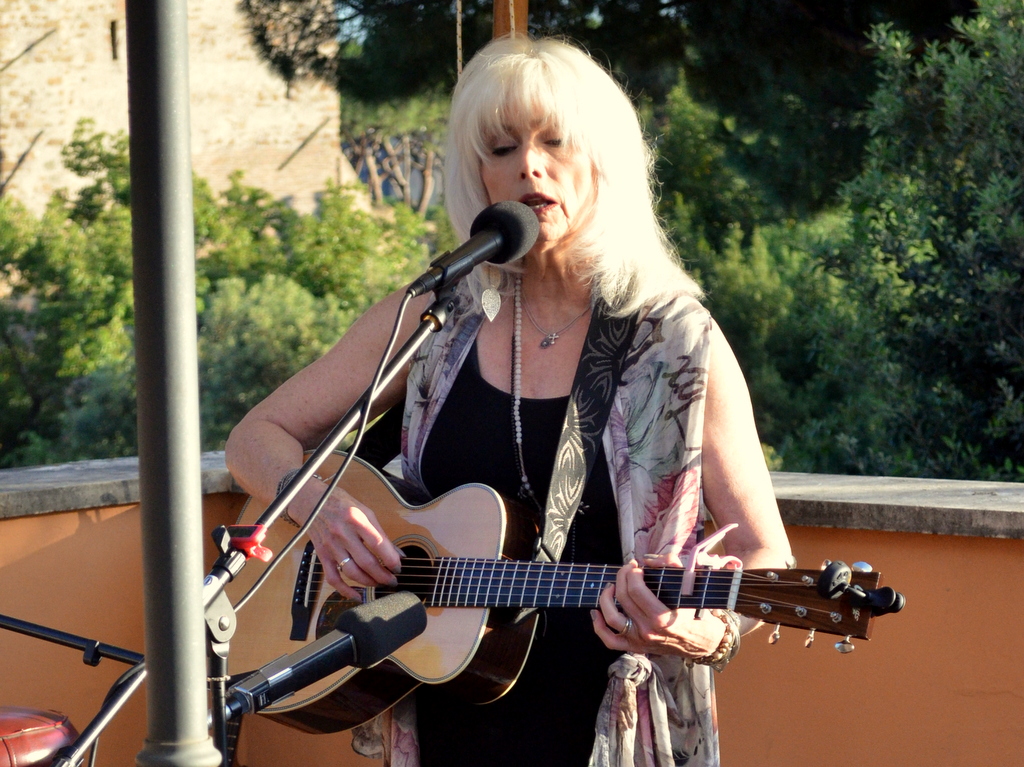 Emmylou Harris performing at at private concert on June 3 at the residence of David Lane, US ambassador to UN Agencies. Photo by Justin Catanoso