At the conclusion of every UN climate summit I’ve covered since Paris in 2015, I’ve written a story that summarizes the highlights (few) and disappointments (many) in a kind of post-COP analysis. Because of the massive global media attention COP26 drew (nearly 4,000 credentialed journalists), that story was largely written by others before I landed back in North Carolina.

Instead, with this final story from COP26, I followed an idea that came to me during my return flight home. I decided to focus on what seemed to me to be two significant positive developments from a climate summit that was declared a failure before it even started. Those two elements — one old and easily grasped, the other new and technologically futuristic — could turn out to be climate game changers in the decades ahead. That is, of course, if they receive the international support and billions in funding required to enable both to, in one case flourish, and in the other, reach proof of concept on a global scale.

Let’s be clear. The coordinated effort to save the planet by holding global temperature rise to 1.5 degrees C over pre-industrial times has virtually no chance of succeeding without these efforts I write about, in combination with accelerated efforts to decarbonize industrial economies and halt deforestation and biodiversity loss in the world’s great forests. G-20 leaders have simply wasted too many decades making problems worse for any shortcuts or easy fixes to this existential climate crisis.

A few days before leaving for Glasgow and COP26, I had a Zoom call with Torbjørn Gjefsen of Rainforest Foundation Norway in Oslo. We spoke at length about the issues he and his group are most focused on: promoting and supporting indigenous rights in tropical countries around the world. He wanted me to do a story from the climate summit; he was pushing on an open door. Here’s why I was eager to write this story.

In September 2018, I covered the Climate Action Summit in San Francisco organized by then California Gov. Jerry Brown and former New York City Mayor Michael Bloomberg. Mongabay wanted me there primary to write about an issue then largely underreported and little recognized: that if tropical countries were serious about preventing deforestation and meeting their carbon reduction pledges under the Paris Agreement, they had no better means of doing both than by returning land tenure and civil rights back to the Indigenous peoples and local communities (IPLC) who have occupied the land, as one tribal leader told me, “since time immemorial.”

Years of meticulous scientific research comparing places where rights had been returned to those where IPLCs were still largely marginalized demonstrated the impact of doing the right thing by nature and humanity.

In Glasgow, during my first two days on site at the Scottish Events Center at the end of the summit’s first week, Torbjørn arranged for me to interview, through translators, Indigenous leaders from Brazil, the Democratic Republic of Congo and Indonesia. It was an honor to talk with each one of them and share their stories at a summit where for the first time their presence was met with praise, recognition and billions in funding for the important role they can play in their home countries in climate mitigation.

As my story explains, the momentum tribal leaders felt in Glasgow will only translate into action if the leaders of those countries allow it. DRC? Yes. Brazil and Indonesia? Not until there are regime changes. 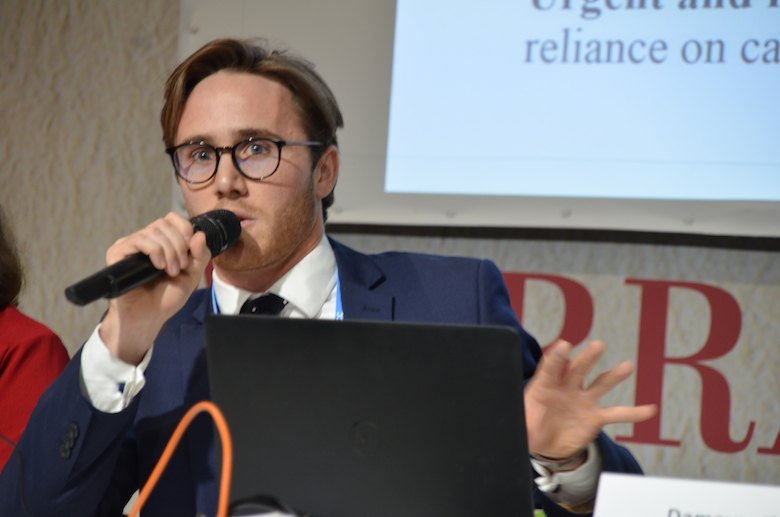 Edward Perry of Birdlife International speaks at a panel at COP22 in Marrakesh, Morocco. Photo by Justin Catanoso

This seemed an ideal story for Mongabay.  Protecting forests, fighting deforestation and striving to replant tens millions of trees as natural carbon sinks, are critical strategies in the Paris Agreement in slowing the rate of global warming. But fossil fuel representatives at COP22 aren’t quite getting it. They do not want to strand assets (oil, natural gas, coal) underground, and are promoting unproven technologies that haven’t even been developed yet as ways to do business as usual. Environmentalists aren’t buying it.