Mike Gaworecki has done a great job hosting the Mongabay Newscast for years. He’s invited me on the program several times, including on Feb. 10, 2021 with this episode. Here, he talks with me about the story and issue I’ve been covering since spring 2018 along with an eco-warrior from North Macedonia who is an expert is the hazards of hydropower. Mike described the episode like this:

On this episode of the Mongabay Newscast, we look at two energy-related technologies that are being promoted as climate solutions, biomass and hydropower, which might have unintended consequences that hamper their ability to supply clean energy and thus might not be sustainable solutions at all.

Our first guest is Justin Catanoso, a professor at Wake Forest University and long-time Mongabay correspondent. Catanoso tells us about the loopholes in renewable energy policies that have allowed the biomass industry to flourish under the guise of “carbon neutrality,” even though the burning of biomass for energy releases more carbon emissions than burning coal.

We also speak with Ana Colovic Lesoska, a biologist by training who founded the Eko-Svest Center For Environmental Research in North Macedonia. Colovic Lesoska was instrumental in shutting down two large hydropower projects in her country’s Mavrovo National Park, but there are still more than 3,000 new hydropower projects proposed in the Balkans. She tells us why hydropower is being adopted by Balkan countries and whether or not hydropower can be a climate solution at any scale. 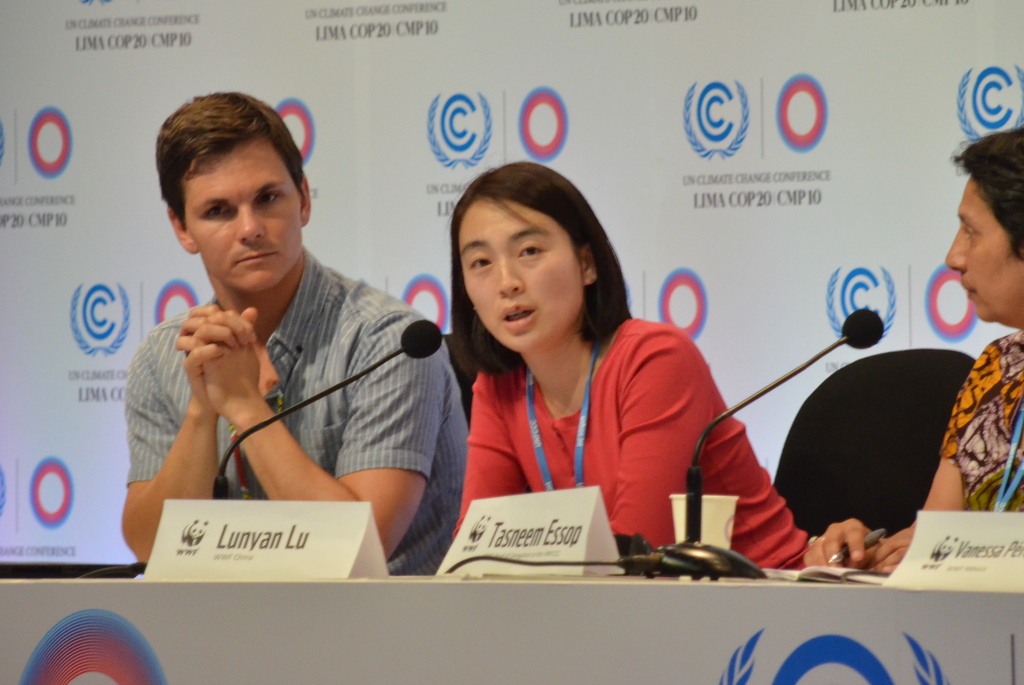 Lu Lunyun of the World Wildlife Fund in Beijing at the UN climate summit in Lima, Peru. Photo by Justin Catanoso

LIMA, Peru (Dec. 9, 2014) — Lunyan Lu has a tough job. As a Chinese national, she works in Beijing for the World Wildlife Fund as its climate and energy program director. There she does what he can to lobby for environmental safeguards and greater use of alternative energy sources.

Chinese has kept a low profile thus far in the United Nation’s climate negotiations that I’m covering this week in Lima, Peru. But it is the elephant in the room — the world’s largest emitter of greenhouse gases with a deep supply of coal to burn and dependence on it to maintain its torrid transition from a rural to urban society with a leading economy.

During a press conference today with WWF staffers from countries including South Africa and Mexico, Lu made a comment that caught my attention. While coal accounts for 67 percent of China’s energy production, the use of coal “has plateaued,” she said, and actually will decline by 1 percent this year.

She did not offer this fact for applause. She doesn’t work for the Chinese government. She lives in Beijing and thus chokes on the smog-dense air like everyone else there. But she offered the insight as a way of illustrating that China is at least trying to reduce greenhouse gas emissions.

When I asked her during the press conference if it’s possible for China to accelerate its slightly declining rate of coal burning, and lower its peak emissions before 2030, as President Xi Jiping recently pledged, she said: 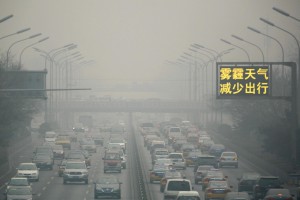 Smog in Beijing on an average day. NBC News

“We have already seen a plateau trend of the coal consumption for this year. That may be not forever. That could be temporary, just for this year. That’s why we (the WWF) encouraged the government to maintain this trend. We also see the government has taken some action, using imported natural gas to offset some of its coal consumption. And they have a clear plan for nuclear energy. We do see that clear plan for action. We will try our best to urge the government to peak sooner.”

I spoke with Lu after the press conference. She explained that China is in a bind. Its growth goals are relentless, and its most abundant natural resource for energy is coal. It can’t practically import enough natural gas to meet its needs and reduce carbon emissions. But it is moving fast on renewable energy sources, with more than $100 billion invested thus far in wind, solar and nuclear platforms.

Lu confided that just like most Americans, most Chinese pay little attention to  issues related to climate change — despite gravity of the earth’s condition. But unlike in America, the air in China’s cities is so black and polluted from energy and traffic smog that people there are outraged and demanding that its government act for better air quality.

“We see this as an opportunity,” Lu told me. “This public outcry is about smog, but it also helps to fight climate change.”