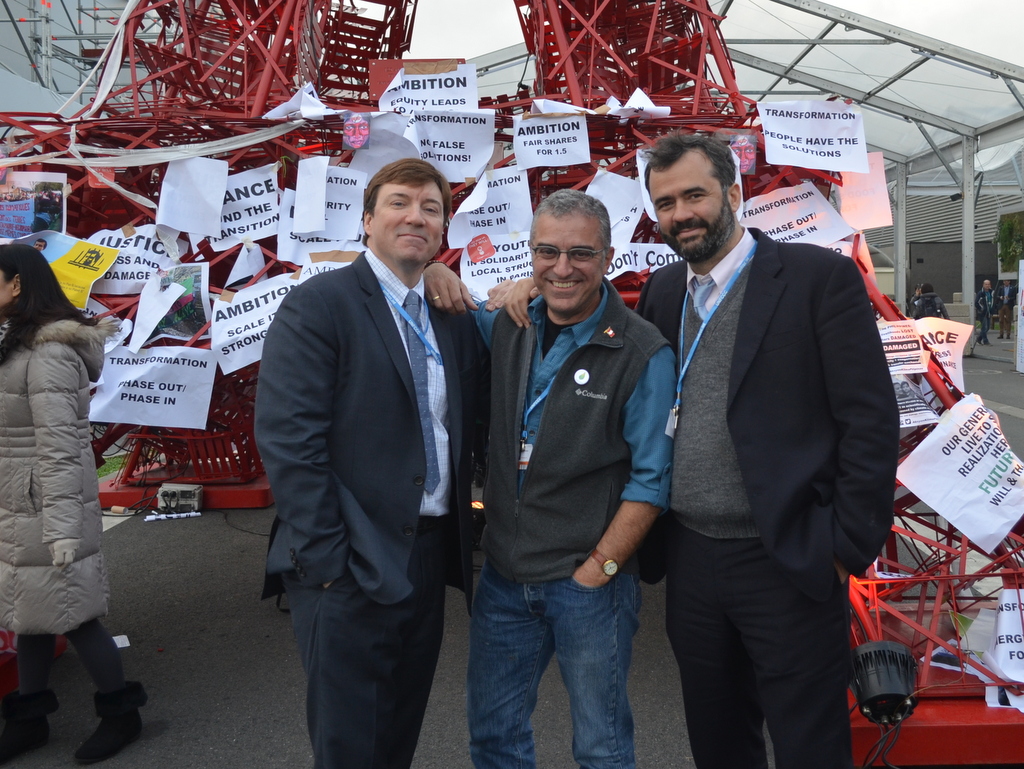 There was slim hope that UN delegates at COP21 outiside Paris, France, would reach an unprecedented accord by today’s 6 p.m. deadline. It would have taken 186 countries agreeing to reduce their carbon emissions, and a whole host of other thorny issues. That hope was dashed early in the day, when the French hosts said the next draft, and possibly the final draft, will be released around 9 a.m. Saturday, Dec. 12, 2015.

My two friends, who have covered multiple COPs, are climate change reporters for Bloomberg/BNA — Dean Scott on the left, Eric J. Lyman on the right.

Generally, there is a good deal of optimism about the draft released last night, though developing countries are worried that the language on adaptation, and the money available for them to fight the ravages of global warming, falls far should of what’s needed.

“France is respecting  red lines and leaving room for options,” said an NGO from India in a press conference this afternoon. “For example, developing nations want a 1.5 degree C cap (by 2100) and the U..S. wants 2 degrees. You can see the tension in the text.”

The cap refers to how much temperatures can rise between 1900 to 2100 to avoid the worst impacts of global warming. The earth has already warmed 1 degree C (1.8 F) and impacts are felt dramatically in all corners of the globe. Drought. Sea-level rise. Intense storms. Melting ice caps.

Eric, who has covered 14 COPS, put things in perspective:  “Game theory says that in any negotiation, the draft always weakens between the penultimate draft and the final draft. It just stands to reason. The issues left to resolve are the hardest, and they only way they get a unanimous vote — which is required — is to compromise.”

Dean, who has covered 11 COPS, said the last one to end on a Friday, close to deadline, was Nairobi in 2006, and little was accomplished. “It’s par for the course,”  Dean said. “Climate summits are like a good party. They should spill over into the weekend.”

The world is hoping there is something to truly celebrate.