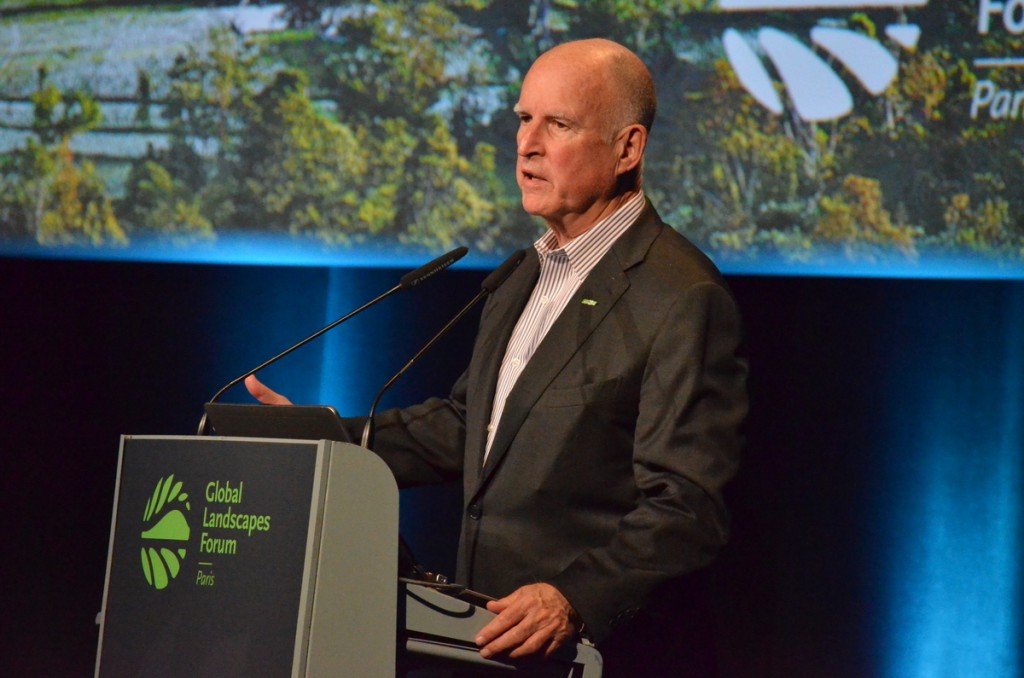 California Gov. Jerry Brown, whose distinctive voice I recognized as I entered late the packed hall in which he was speaking, was trying to remember a song from the 1960s. “I think it’s called ‘Eve of Destruction.’ Can’t remember who sang it, but I still like it. You should listen to it. It’s perfect for today.” (The song was written in 1964 by P.F. Sloan and performed by Barry McGuire, whoever the hell they were…)

Brown was a speaker today, Dec. 6, 2015, at the Global Landscape Forum, a side event of panel discussions and speeches about the importance of land use policy and forest preservation. Brown’s panel was called: “Science-policy exchange — Big ideas to connect landscapes, climate and development.”

Brown is a leftie, hippie-type who dated folk singer Linda Ronstadt in the 1970s when he was first California governor, and ran for president in 1980 as Gov. Moonbeam. He has since become the most mature, liberal, effective and realistic governor in America. Now in his 70s, he speaks his mind, and doesn’t give a darn much what people think. Why should he? When it comes to environmental protection and innovation, California leads the nation, if not the world.

“Not one thing is going to do it,” Brown told the crowd of more than 1,500, when it comes to keeping global warming under 2 degrees C by 2100. “It’s all of it together. This conference (COP21) is one of the biggest things for climate change ever. Every country is involved. Every country is pledging to do something. Let’s get that settled and then start pushing for more.

“The challenge will be relentless. But the fact that you’re here says a lot. Don’t get tired. Don’t lose heart. Don’t get excited about something else. This is it. But it’s just the beginning. It’s a lifetime challenge and task, if we really want to save the planet. And in that, I join you.”